GI Brides follows the stories of four English women, Sylvia Bradley, Rae Brewer, Margaret Boyle and Gwendolyn Rowe, the parts they played in the war effort, their romances and moves across the pond to American with their new GI grooms. The best part- all four women did exist. These are true stories, complete with a mid-book insert containing picture of the women, their families and their hunky GI men. The book probably falls into the category of historical fiction. But it’s one of those, historical, realistic, biographical, romantic fiction books. It could be smooshed into a few different places.

I will say, brides coming from the UK to America after World War II was something that I had never thought about. It’s something that the history textbooks don’t even mention briefly- I checked my old high school textbook to make sure I hadn’t just missed that day or something. There were actually meetings at the YMCA and mini support groups of European women! The best part- they STILL have meetings for those that are still alive! It’s just another element to the war that had a relative impact on society but is quietly passed over throughout history and education.

Margaret Boyle was actually great-grandmother of author Nuala Calvi! How cool is that!? Sadly, Margaret had passed away before she saw the completion of the book.

This book was kind of a drag. I mean, thankfully the women all end up finding happiness, but it was hard getting through some of them. I feel like following 4 different women was a bit much, especially in the beginning when they were all dating multiple men and you had to keep track of everyone. I felt like I needed a chart to keep them all straight. They rotated through the four women. I think the book would have been much easier to read,  and much easier to follow and connect with the characters had they just written four separate sections for each one.

It was a cute little book, I read the majority of it on a lazy Sunday afternoon. It was romantic without being anywhere near trashy. It was a nice little read before the hustle and bustle of being in school and back to work in the next week!

Carla Stewart did a brilliant job with this novel. As has created a story with a few of my favorite elements.

1. HISTORY! I have a serious problem, if you haven’t been able to deduct this from my previous book reviews then you might want to go take another look. This novel takes place in 1920’s New York and it is splendid. Absolutely lovely. To give it another layer of depth, she throws in some London, England in there too. Which leads me too…

2. ENGLAND! I love how she incorporated England into the main character’s life, the plot AND threw in the royal wedding. Kudos and extra points for that one. Having just had a royal wedding a few shorts years ago, it was super relatable for me.

3. Relatable characters. Prunella was darling. There are so many things I liked about her character. Her innocents, her passion, her integrity, her faith, her love and loyalty to her family and friends- she was a breath of fresh air. How lovely to have a female be her own hero and not be a cotton headed ninny muggins. Yup. I said it. Everyone has dealt and come across people like the characters in “The Hatmaker’s Heart” in their life. The nasty boss, the cruel girl in school, the first love of childhood, the crazy relatives, the beloved grandmother- it’s like walking out of your life and comfortably walking into someone else’s.

This was such a great read. I read it in a few hours. It was refreshing to read a book that was appropriate in language, plot, and romance. The ending was just so right. There’s something to be said about reading a book that really does just have a happy ending for everybody, even if it does seem fantastical and silly. But, what girl doesn’t want to see love win out in the end? 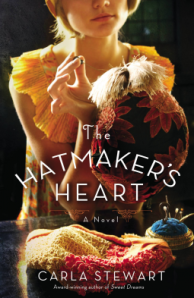